While doing some trend research for my next topic to write about, I came across the term “human meat japan” as one of the trending terms. Oh my, that certainly peaked my interests. It seems there is an article floating around stating that a restaurant opened legally in Japan where they served human flesh.

Living in Japan for 3 years now, if such a restaurant do open, there would definitely be an uproar in the media. I mean, the biggest news these days was a coverage of a sumo punching another sumo out of the ring. Certainly no hint of a rise of popularity in cannibalism.

So lets look at the article and then pick out various clues of the obvious hoax.

The earliest instance of this news I could find is this article on a get pay for upvotes website from an unknown poster with no profile images and two other past articles to his name. His last two articles were about “Cats Eating Marijuana and getting High” and one showing gifs of scabs being cut off asking if you can watch them without blinking. Trustworthy source? You be the judge.

A scary restaurant nicknamed “The Resoto ototo no shoku ryohin”, which means in English “Edible Brother”, opened its doors to the Japanese public and from all over the world, where it offers its customers a varied menu where prices vary from 100 up to 1000 euros, that is to say the dish with human flesh, more expensive would be 1193 US dollars.

“The Resoto ototo no shoku ryohin” I assumed is a broken romanization of レスト弟の食料品, which actually just translates to Restaurant Brother's Food and not “Edible Brother” as they have said. A search on Google and Japan's business directory for even part of the name yields zero results. This place clearly fictional.

In Japan since 2014 a law was approved that allows the consumption of human flesh, obviously conserving conditions such as the sanitary level of this and the origin.

Technically, there isn't any law that allows or disallows consumption of human flesh. But, as pointed out by this article, in Japan, a human being who dies in an accident or disease, large living parts such as limbs or aborted fetus 12 weeks or above is treated as a human being and are to be subjects or cremation. Other tissue pieces are treated as medical waste and incinerated as described above. In that sense, there is no legal way to obtain human parts for consumption or any other use apart from medical research or organ donation.

Thinking of making a trip to Japan for their (non-human) yakiniku and awesome food? Consider staying in an Airbnb since its the cheapest accommodation you can find in Tokyo. Find out how to get up to 53% off your Airbnb with this guide. 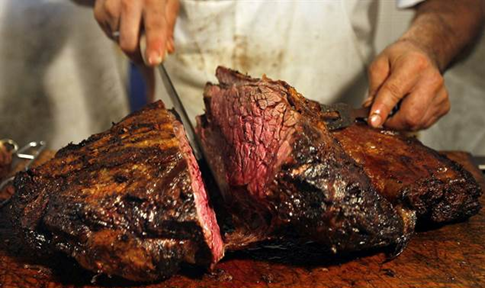 That image of that huge slab of meat is view bait heaven. I hope most readers are saavy enough to know that that isn't an actual photo of a huge slab of human meat being sliced. A simple image search brought up this article which same image is used when talking about beef being a luxury in 2050 or this one about beef inspections in Colombia.

That is the sad state with irresponsible media allowing or spreading fake news. Be sure to exercise your own judgement before blindly following or sharing news.

While this is fake, if you are interested in reading about people eating things that are alive, be sure to check out this article on the art of Ikizukuri (cooking things while they are alive).

The best futon in the world.

Sealing the deal, the Japanese way